IMPACT OF THE MARSHALL SCHOLARSHIPS 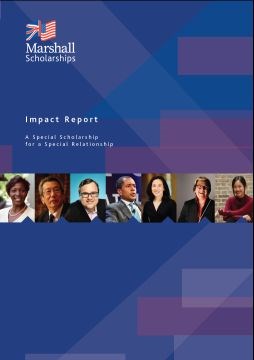 The impact of over six decades of Marshall Scholarships

On March 5 1946, Winston Churchill stood in Westminster College in Fulton, Missouri, and delivered the now famous “Sinews of Peace” speech, which brought phrases including ‘the special relationship between Britain and America’ into general use.

Marshall Scholars are a living embodiment of the enduring special relationship between the UK and America. Chosen for their leadership and ambassadorial potential, as well as their academic ability, Marshall Scholars benefit from the UK’s outstanding academic programmes, whilst experiencing the best of British culture, heritage and values, returning to the US as ambassadors and advocates for UK-US relations.

It is their connections – forged and sustained through the arts, humanities, sciences, politics and beyond – that are key to the national interests of both Britain and America. They help us to defend our shared values, protect our people, grow our prosperity, and collectively tackle our most pressing global challenges.

During the Covid pandemic, Marshall Scholars have been at the centre of national and global responses. Their work is advancing scientific discoveries, medical responses, and remedial measures across public policy, business, education, and other sectors. One example is Marshall Scholar Dan Barouch at the Barouch Lab at Harvard University, which has partnered with Johnson & Johnson to develop a COVID-19 vaccine for global distribution.

Marshall Scholarships are from different and diverse backgrounds, and they are encouraged to study at a range of UK universities. This is reflected in the vast range of fields in which Scholars excel, including:

This report is a timely reminder that the Marshall Scholarships are an important and valuable asset – one which helps the UK to tell its story on a global stage and has significant benefits for individuals, nations, and society as a whole. The report covers seven key impacts of Marshall Scholarships:

John Raine CMG OBE, Chair of the Marshall Commission said of the report: “Our Impact Report shows vividly the extraordinary influence of Marshall Scholars as leaders in the national life of the US both inside and outside government.  In areas as diverse as national security, the sciences, performing arts and most notably in the current pandemic, public health, Marshall Scholars continue to shine and provide inspiring leadership. Many of them also continue to play a dynamic and critical role in strengthening the special relationship between the US and the UK of which the Marshall Scholarship has been since its inception an important sinew.”